These amazing ‘dogs with jobs’ are helping humans in incredible ways!

What is it about dogs, exactly, that keeps us enamored and enchanted?

Running right across our hearts with their tiny paw prints, dogs are our closest confidante and best friends!  These amazing animals, almost divine, have taken upon themselves to not only make us happy but also help and heal us in any way they can.

Their talent goes far beyond chasing tennis balls or fetching newspapers. Armed with their extraordinary sense of smell and the ability to be trained for the greater good, these dogs with jobs have carved out niche careers for themselves.

In surprisingly impressive ways, dogs are helping us run specialized chores that only they can do. From helping a special needs human to detecting bombs, they are doing it all.

Dogs are the best in the world at what they do. Here are a few dogs with jobs who may make us reconsider our career priorities and inspire us to do something more meaningful!

Service dogs or Assistance dogs help their humans (with a disability, such as visual impairment, hearing impairment etc.) They’re trained to help with daily chores like – open and close doors, navigate busy areas such as airports, detect seizure alerts, and even give psychological help.

The dogs who pass the training program are matched with humans in need of mobility assistance, seizure alerts, autism assistance, and hearing and guide help.

Like Service dogs, therapy dogs also go through training, but they usually work on a volunteer basis to provide comfort and companionship for those in need — especially those suffering from a post-traumatic stress disorder.

Dogs see the world through smells, a sense so evolved that they use it to save lives. Police and rescue teams across the world depend heavily on dog’s innate ability for the smell to drive search and rescue operations. Dogs use their unmatched hunting, scenting, and tracking abilities to rescue humans from avalanches, debris piles, fires, waters etc.

Trakr, the Canadian police dog, was credited with locating the last survivor found beneath the 9/11 rubble.

He worked relentlessly searching for survivors the entire time, before collapsing from smoke inhalation, exhaustion, and burns and was treated for his injuries before returning to Canada.

Finally, we have a politician who is a good boy. Duke, the mayor of Cormorant, a tiny Minnesota town has been elected to the office – not once but thrice!

Not all politicians are corrupt. Some are dogs. 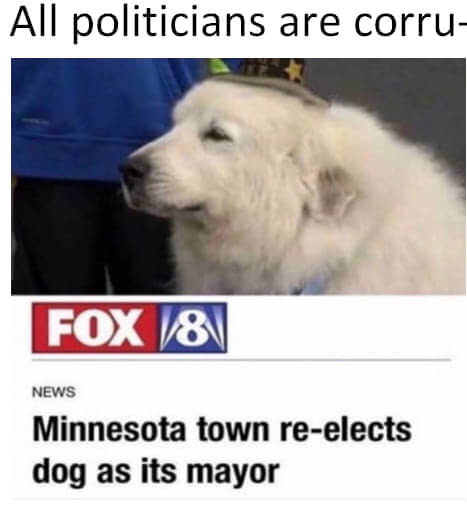 Tubby, said to be the world’s greenest dog, after entering into the Guinness Book of Records for sniffing out 26,000 plastic bottles and carrying them for recycling.

Piper, Michigan’s famous airport dog served for over three years scaring more than 8000 birds off the runway and thus saving fatal flight collisions with birds and other wildlife.

When it comes to the war on drugs, where the best of scanners fail, dogs prevail. The sniffer dogs are at the fore when it comes to busting drug dealers and keeping the society safe.

See also: The hero dog who discovered drugs in his backyard 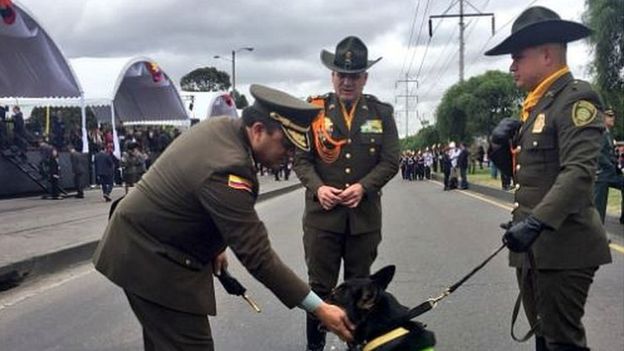 Sombra sniffed out 5.3 tonnes of cocaine and recently found another four tonnes stashed in car parts meant for export. She has taken part in more than 300 operations with the counter-narcotics police.

In July 2018, Colombia’s top sniffer dog Sombra (Shadow) was moved to ensure her safety after a drug gang put a price on her head. She found almost 10 tonnes of the gang’s cocaine and helped bring about the arrest of 245 suspects!

Sadly, her exploits have put her on the radar of Urabeños mafia, who have put a 200 million pesos ($70,000) bounty on her. Amid concerns of her safety, she was moved to a relatively secure location – Bogota’s El Dorado airport where this good girl continues her detection work.

Jake, the pit bull, was abandoned in a house fire. Now he works with firefighters. In his free time, he also collects donations for Carolina Children’s Charity.

Such a good boy! 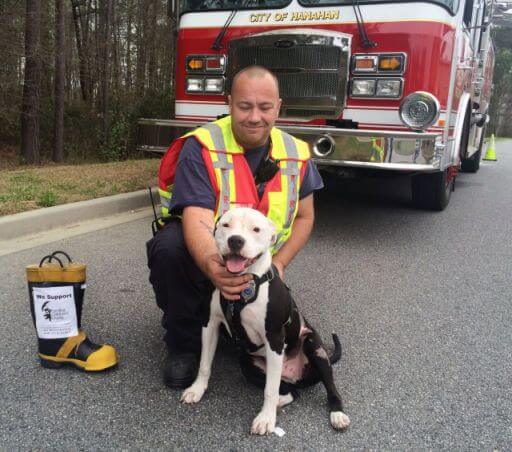 Many beaches and coastguard associations across the world are deploying the services of dogs to help rescue drowning humans. K9 lifeguards who work with the Italian Coast Guard, are believed to save about 3,000 people every year.

When blood sugar levels change, the human body releases chemicals that dogs can smell. Diabetic-alert dogs are trained to smell when their partner’s blood sugar level is dangerously off and to let them know that action is needed to get those levels back in the safe zone.

Similarly, allergy detection dogs can be trained to sniff out allergens to their humans like peanuts, milk, soy, latex, or other substances.

Long before dogs took on the fight against the terrorists, they searched battlefields for wounded soldiers delivering medical supplies.

Herding dog breeds like sheepdogs and collies keep cattle and poultry safe from predators like foxes and wolves. With proper training, they can even adapt to giving protection to other species.

‘Oddball’, the dog, saved an entire colony of fairy penguins from fox attacks in Warrnambool, Australia. The penguin conservation project led by dogs continues to this day and has been credited with saving thousands of little penguin’s lives.

From the days of silent cinema to the era of Netflix, dogs have had your entertainment fixed. There have been some phenomenal dog actors whose lasting impressions have been monumental in the movie world. This has even led to dedicated awards like Palm Dog which celebrates them.

Uggie, the ace canine actor, co-starred in the Oscar-winning film ‘The Artist’ and his fandom grew so strong that there was an internet campaign to give him an Oscar!

The 2019 Vancouver Police Dogs Calendar features the dogs of the police department posing for pictures around Vancouver. All the proceeds from the sales raised money for Cancer Foundation and the Children’s Hospital Foundation.

The president of Ireland, Michael D. Higgins dogs’ Bród and Síoda (Pride and Silk) welcome guests, bond with children and even attend official events. The ‘first dogs’ are very popular, and many groups who come to visit Aras an Uachtarain don’t leave until they see them.

Dogs are being used in South Africa to help ensure the survival of the wildlife including its rhino which has been severely impacted by wildlife crime. South Africa holds nearly 80 per cent of the world’s rhino but over the past decade over 8,000 rhinos have been lost to poaching.

Now a pack of dogs is tracking and thwarting poacher operations.

This pack of dogs varies in breeds and had training till they began work as 18 months-olds at the Southern African Wildlife College in Greater Kruger National Park. The success rate of patrol teams using dogs is 68% as compared to 3-5% for teams with no canine capacity.

Looking for a job change? Check out these amazing dog-friendly offices.

“Air Chief Marshal” Foo Foo (1997–2015) was the pet poodle of Maha Vajiralongkorn, who was at that time the Crown Prince of Thailand. The dog was a favourite of the prince and often accompanied him on royal engagements.

To criticise Air Marshal Foo Foo would have a potential penalty of 10 years imprisonment, due to Thailand’s harsh laws for criticizing royalty.

Foo Foo died in February 2015, at the age of 17, and was cremated after a traditional Buddhist funeral.

Maha made the pooch an Air Chief Marshal in the Royal Thai Air Force and the dog appeared at official functions dressed in a dinner jacket. In 2007 Foo Foo was a guest at a reception held by the US Ambassador Ralph Boyce. When the dog died in 2015 Maha gave him a four-day funeral complete with Buddhist rites before cremating him in a lavish ceremony.

Gunner, the dog, who served in Australia during World war II possessed such acute hearing that he could warn airforce personnel of incoming Japanese planes 20 minutes before they arrived and even showed up on radar!

Gunner could also differentiate the sounds of allied and enemy aircraft.

Play or work, no man or machine, can quite frankly, outrun dogs for what they bring to the table. Try topping that on your LinkedIn profile! Over to you, have you come across dogs donning other career paths? Please let us know in the comments below.

2 Replies to “These amazing ‘dogs with jobs’ are helping humans in incredible ways! ”