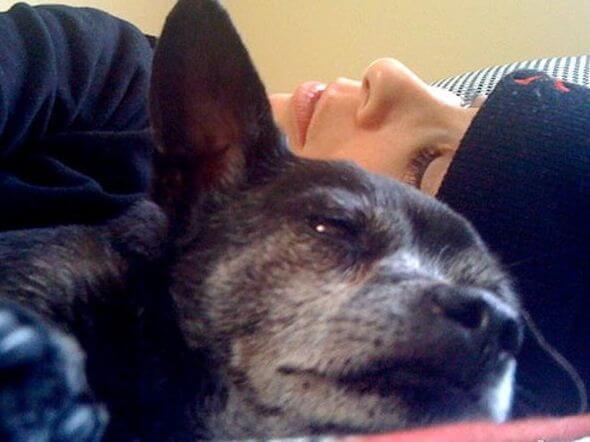 Friends through thick and thin, dogs are the best and when they pass away they leave an awkward space. Of all the letters ever written, the most poignant are the ones addressed to the dead. Here are 3 Heartwarming letters to departed dogs:

You left paw prints, sweetheart
On your sister’s heart
You changed her in a way
She still hasn’t come to understand

She’s scared of loving
Because she’s scared of losing
Of being left, even more incomplete
Her heart is laminated
With your wet kisses
You still live there
Jumping and frolicking

We’ll let nobody in, sweetheart.

14 years.
My longest relationship.
My only experience of maternal love.
My constant companion.
My best friend.
Duck.

See also: The dog who loved me

Daisy (“Black Watch Debatable”) died December 22, 1931, when she was hit by a Yellow Cab in University Place. At the moment of her death she was smelling the front of a florist’s shop. It was a wet day, and the cab skidded up over the curb — just the sort of excitement that would have amused her, had she been at a safe distance. She is survived by her mother, Jeannie; a brother, Abner; her father, whom she never knew; and two sisters, whom she never liked. She was three years old.

Daisy was born at 65 West Eleventh Street in a clothes closet at two o’clock of a December morning in 1928. She came, as did her sisters and brothers, as an unqualified surprise to her mother, who had for several days previously looked with a low-grade suspicion on the box of bedding that had been set out for the delivery, and who had gone into the clothes closet merely because she had felt funny and wanted a dark, awkward place to feel funny in. Daisy was the smallest of the litter of seven, and the oddest.

Her life was full of incident but not of accomplishment. Persons who knew her only slightly regarded her as an opinionated little bitch, and said so; but she had a small circle of friends who saw through her, cost what it did. At Speyer hospital, where she used to go when she was indisposed, she was known as “Whitey,” because, the man told me, she was black. All her life she was subject to moods, and her feeling about horses laid her sanity open to question. Once she slipped her leash and chased a horse for three blocks through heavy traffic, in the carking belief that she was an effective agent against horses. Drivers of teams, seeing her only in the moments of her delirium, invariably leaned far out of their seats and gave tongue, mocking her; and thus made themselves even more ridiculous, for the moment, than Daisy.

She had a stoical nature, and spent the latter part of her life an invalid, owing to an injury to her right hind leg. Like many invalids, she developed a rather objectionable cheerfulness, as though to deny that she had cause for rancor. She also developed, without instruction or encouragement, a curious habit of holding people firmly by the ankle without actually biting them — a habit that gave her an immense personal advantage and won her many enemies. As far as I know, she never even broke the thread of a sock, so delicate was her grasp (like a retriever’s), but her point of view was questionable, and her attitude was beyond explaining to the person whose ankle was at stake. For my own amusement, I often tried to diagnose this quirkish temper, and I think I understand it: she suffered from a chronic perplexity, and it relieved her to take hold of something.

She was arrested once, by Patrolman Porco. She enjoyed practically everything in life except motoring, an exigency to which she submitted silently, without joy, and without nausea. She never grew up, and she never took pains to discover, conclusively, the things that might have diminished her curiosity and spoiled her taste. She died sniffing life, and enjoying it.

One Reply to “3 Heart warming letters to departed dogs”