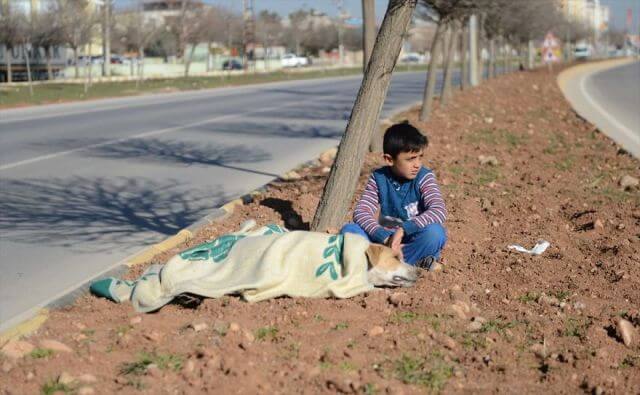 The world as we know it is staring blatantly into the worst refugee crisis since World War II. A staggering four million have been displaced from their homes in Syria alone.  Where the word of prophets and politicians have fallen on deaf ears, an 8-year-old refugee boy Hüseyin el-Hasan from war-torn Syria is rippling peace waves. Hüseyin spotted a stray dog hit by a car near his new home in Kilis, Turkey. He not only rushed to help but also brought a blanket from his home – even when his own house was experiencing some heating problems. The boy alerted the adults to call for help. While waiting for the rescuers to arrive, Hüseyin lovingly stayed by the dog’s side…

See Also: Man who dropped out of college to look after 500 animals

Hope in humanity often rekindles with small acts; acts which are anything but small. Unfortunately the little boy was in for a heartbreak as the poor dog succumbed to his internal injuries. However the city of Kilis was moved by this little lad’s act of kindness. The city’s deputy mayor visited Hüseyin at home to honor the boy and his family.

Reminds this dog of a placard he saw in Rome, a teenager hoisting Warsan Shire’s immaculate verses…

You have to understand,
that no one puts their children in a boat
unless the water is safer than the land.