What do dogs dream about? 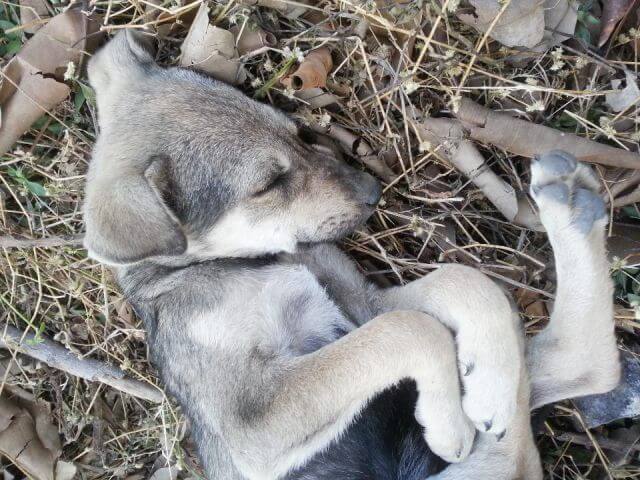 Of the myriad questions that ramble through a dog lover’s mind, perhaps the most frequent is: ‘What do dogs dream about?’

Just like humans, dogs are able to dream while sleeping. Cats, rats, and even some species of birds also dream. Dogs enter REM [Rapid Eye Movement] sleep just like humans which is when the dreams that we remember happen.

Dog dreams begin at about 20 minutes into their sleep and last for about 2-3 minutes — during which time a dog’s breathing can become irregular. Small dogs usually have shorter, more frequent dreams whereas dogs of a generally larger breed usually have fewer dreams that last longer.

Puppies dream more frequently than dogs of any other age and researchers believe this is because puppies have more to learn and experience.

What do dogs dream about?

Unfortunately, because dogs can’t talk to us, it’s impossible for us to know exactly what they experience in their dream life. But, science has the answer!

What the dogs dream about is YOU.

“What we’ve basically found is that dogs dream doggy things. The dream pattern in dogs seems to be very similar to the dream pattern in humans,” Stanley Coren, a professor emeritus of psychology at the University of British Columbia, told Live Science.

The dreams also vary according to the dog’s breed and size. Since dogs spend more than half their day sleeping – they’ve plenty of time to think of their humans.

“Humans dream about the same things they’re interested in by day, though more visually and less logically. There’s no reason to think animals are any different. Since dogs are generally extremely attached to their human owners, it’s likely your dog is dreaming of your face, your smell and of pleasing or annoying you.”

So the next time your puppy is sleeping – flapping paws and those rapid eye movements, he may well be dreaming about you.

Do dogs have nightmares?

You may have seen a whimper or cry during their sleep.  Researchers believe that dog dreams work in a similar way to human dreams. Sometimes dreams are good and at others, they may be nasty. It’s hard to tell if your dog is having a good dream or a nightmare but, if your dog seems disturbed while sleeping, it may be a nightmare.

Should you wake up your sleeping dog?

You should avoid waking a dog while he is sleeping. For dogs that get startled easily, are having listening issues or are old, may bite back. Instead of this gently stroking their back or calling out their name calmly would help.

Sleep is important for your dog’s physical and mental health. Ensure that your pup gets plenty of time to relax and sleep. Deep dreaming sleep is as important for dogs as in humans. It helps in creating memories and learning. Dogs can sleep up to 16 hours a day.

When you sleep tonight, do snuggle up next to your pooch as you traverse the dream world together 🙂

Don’t have a furry pal to snuggle with? Perhaps you gotta adopt one now!

4 Replies to “What do dogs dream about?”