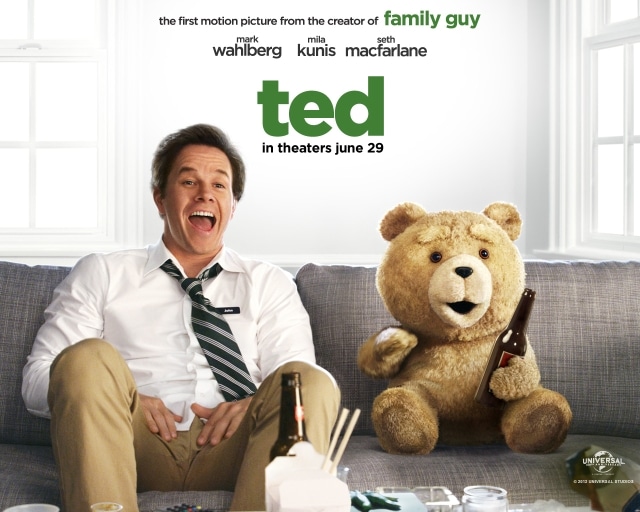 In my growing up years, Chintu was my best friend. We would talk of the world, from chasing cats to getting rid of milk (usually on the flower pot when Maa wasn’t looking.) We were inseparable but then logic crept in. Chintu is a stuffed teddy bear and toys are for kids. I abandoned him to move on with my newly found mind. Yet despite all these years, engraved fresh in my memories, Chintu remains the emblem of my childhood.

The flavor of the season, despite strings of high budget extravaganzas, is but a stuffed teddy bear brought to screen by CGI and backed by an unapologetic portrayal as a cuddly foul-spoken, immoral and weed addict teddy bear. In the movie ‘Ted’, John Bennett is a lonely kid whose wish for bringing his only friend (teddy bear) to life comes true thanks to a falling star.

Teddy bear movies are for kids, right? Not if Seth MacFarlane (Family Guy fame) makes them. So why is this dog reviewing a rated R movie? Well, for one it stars a furry animal and secondly, underneath its ‘mature content’ there’s a story of friendship that defies age and worldly logic of growing up in a certain way. This laugh riot is neither as dramatic as ‘The Beaver’ wherein Mel Gibson’s character begins communicating with the world through his hand puppet nor is it as romantic a comic as ‘Lars and the real girl’ where a neurotic Ryan Gosling falls in love with a doll.

If you imagine Ted and John to be grown-up avatars of Calvin & Hobbes, it’s just the opposite.

Ted, however, hints of having Calvin’s traits. Unlike Hobbes (Calvin & Hobbes), Ted reveals himself to the society from day one and is the cynosure of all eyes, highlighting chat shows and driving media frenzy.  Years pass. Fast forward to present day, the fame froths down but all through this John remains

Ted’s best friend and roommate for life. John (Mark Wahlberg) is 35 and still very much afraid of thunderstorms. Teddy too has frazzled and sunken deep in drugs. John’s gorgeous girlfriend Lori (Mila Kunis), wants John to ‘grow up’ from hanging out with Ted as she sees it as the sole reason for John’s mediocre life. John has to choose between taking his relationship with Lori to the next level or side with Ted.

A final word of caution again, no matter how cute Ted looks, children aren’t its ideal audience! Did I love it? Hell yeah!