The absolutely best Calvin and Hobbes comics ever! 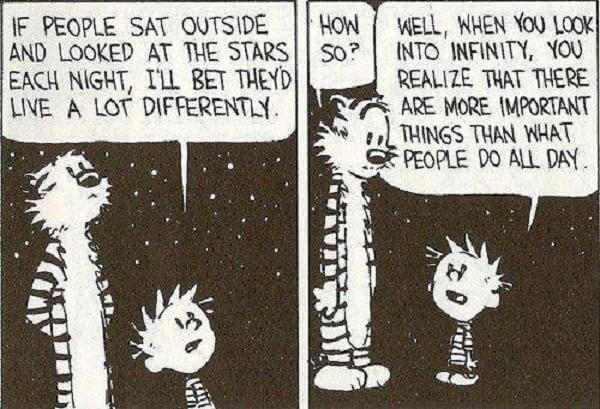 The wonderful duo of Calvin & Hobbes which guided me through those innocent days of childhood is as vivid and lively as the moments that I have lived, here’s my list of best Calvin and Hobbes comics on issues ranging from the environment to death.

The innocent friendship between a little boy and his stuffed tiger(or was it so?), catapulted this comic strip to the stratosphere of cult followership. The creator, Bill Watterson’s, understanding of a kid’s growing up angst and struggles and his relationship with his best friend, a tiger, makes for a deeply profound and entertaining read. The innocence and wisdom of this little boy and his imaginary friend will always stay with us.

Mr Watterson, the creator of the iconic comic strip, is known for remaining away from public attention. Calvin and Hobbes wasn’t an overnight success – after being rejected many times, Watterson finally signed a contract with Universal Press Syndicate and November 1985 marked the launch of Calvin and Hobbes, appearing in about 35 newspapers. After a modest first year in newspapers, Calvin and Hobbes got published as a book and was a surprise hit. The book sales encouraged more newspapers to publish the same and the rest as they, is history.

# Calvin and Hobbes on bullies

One of the most endearing C&H strips ever, this incident delved upon the manner in which a child’s innocence encounters death for the first time.

Look out for the end quote- “…But don’t YOU go anywhere.”

What to say about this one…sheer poetry. Did anybody say philosophy?

#Calvin and Hobbes on hunting

Calvin’s take on the hunting industry’s rationalization of killing in the name of containment of overtly populated species. And as irony would have it while the likes of Dodo have been wiped off the face of Earth, humans have multiplied like there’s no tomorrow!

Also, see: The best of Snoopy

Calvin and Hobbes detested human activities that led to contamination of the environment, be it the pollution, the garbage, and litter thrown around, deforestation etc.

# Calvin and Hobbes on animals

The profound impact that Hobbes had on Calvin is depicted in many strips, Calvin often quoted that he loved being amidst furry friends over and above humans.

Here are our favorite comic strips highlighting the animal-loving influence that Hobbes has had on Calvin.

Hats off to Mr. Bill Watterson!

My childhood would never have been what it was or what it still is sans Calvin & Hobbes. Calvin’s rambunctious character and an intelligence quotient which is clearly superlative for a six-year-old along with Hobbes wisdom made for a great read.

Though frequently depicted in the strip as a selfish kid, Calvin does exhibit a deep caring for fauna and flora. He often remarks on the pettiness of humans and envies the quiet dignity of animal life.

Quite like Calvin, my human sidekick Calvy (pompously named after the cult child) misses a filter between his brain and mouth 🙂

#Calvin and Hobbes – too cool for school!

Bill Watterson, the creator of the iconic comic strip, once quipped, “Hobbes has the patient dignity and common sense of most animals I’ve met. Like Calvin, I often prefer the company of animals to people, and Hobbes is my idea of an ideal friend”.

# Calvin and Hobbes on problem-solving

# Calvin and Hobbes philosophical take on all things mortal

# Calvin and Hobbes on watching nature

See also: Dogs who waited for their dead humans

Looking for a forever friend like Hobbes? Adopt a dog!

14 Replies to “The absolutely best Calvin and Hobbes comics ever!”