Movie review Au Hasard Balthazar – Life in an hour and a half! 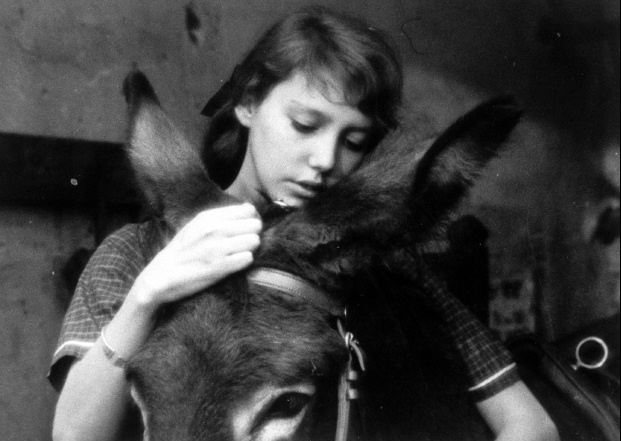 Sometimes it’s not the tale but the art of telling it which makes it great. Au Hasard Balthazar, Robert Bresson’s pièce de résistance is an animal movie unlike any.

Every ten years, Sight & Sound polls a wide international selection of film critics and directors on what they consider to be the ten greatest works of cinema ever made, the 2012 list has Au Hasard Balthazar at #16.  Set in the bucolic backdrop of the French countryside, this allegorical tale follows the life of a donkey─ from burro to becoming beast of burden, and the inevitable end.

This motion picture evokes emotions lurking so deep that you never knew they existed. At times you wonder if you are watching the movie or if the movie is watching you. Balthazar causes you to get out from the comfort of your seat and shakes you up from inside. Every black and white sequence is a sheer cinematic joy, every scene, an ode. It leaves the viewer wanting more, an exclamation mark in movie making!

Timid farm girl Marie (Wiazemsky) and her donkey Balthazar have an idyllic childhood, but the turn of tide takes them on separate paths. The donkey passes through several owners, most of them cruel and apathetic. An unfettered view of human cruelty, suffering, and injustice, filtered through the eyes of a donkey.

Their lives run in parallel as both get abused at the hands of humans.  And as the story unfolds you see how Balthazar is the only one who is selfless. Living well within the periphery of a donkey’s life, never comes a moment where in Balthazar does something ‘extra-ordinary’, he does what a donkey does, silently bearing the brunt of callousness…accepting whatever gets thrown at him.

Poetical and plaintive in its rendition, it’s only with death that Balthazar returns to peace that he had as a burro. The piano score by Schubert justifies the tranquility of a demise marked by prolonged abuse, like an elegy for the saintly donkey.Noted film critic and director Godard’s hailed Au Hasard Balthazar “the world in an hour and a half” and that “everyone who sees this film will be absolutely astonished” and true he was!  It offers cinematic joy, so rare and precious that a viewer, enchanted by the imagery, feels at once fortunate for having experienced it and remorseful for the plight of the poor thing.

“Balthazar is not one of those cartoon animals that can talk and sing and is a human with four legs. Balthazar is a donkey and it is as simple as that. The genius of Bresson’s approach is that he never gives us a single moment that could be described as one of Balthazar’s “reaction shots.” Other movie animals may roll their eyes or stomp their hooves, but Balthazar simply walks or waits, regarding everything with the clarity of a donkey who knows it is a beast of burden, and that its life consists of either bearing or not bearing, of feeling pain or not feeling pain, or even feeling pleasure. All of these things are equally beyond its control.”

If you don’t think it impertinent of a dog to lecture a human then take my word and allow yourself the bliss of this donkey’s bray. For what torrid fates equines encounter is none for us to take. I hope when you see a donkey next, if not anything else, let it be kindness with which you pass it by. And the haunting question that Balthazar poses isn’t- if there is a god but the hypothesis that he exists but has renounced us. And by the time the screen fades to black, you are left wondering if the ‘beast’ were human(s).

7 Replies to “Movie review Au Hasard Balthazar – Life in an hour and a half!”