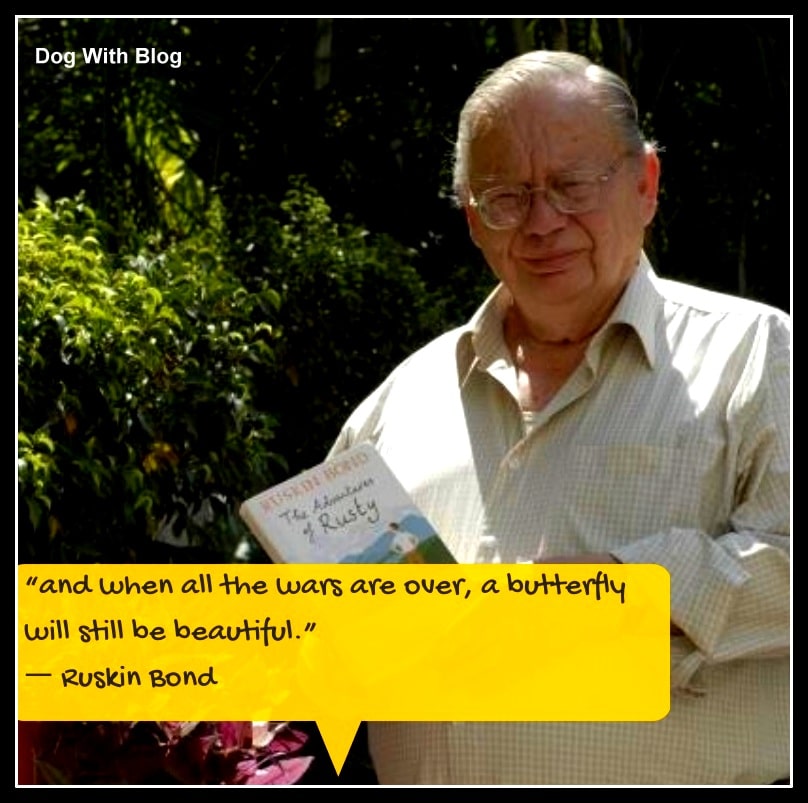 Neatly tacked in my diary, cursive fonts from yesteryears, have some of my favourite words, the Ruskin Bond quotes.

Far from the fanfare of mushrooming literary festivals where it’s not the books but the celebs and their dresses that take the center stage, at a safe distance from the hashtags, aloof from the crooning book jackets screaming bestsellers in bold, lives the hermit whose name leaps over generation barriers. I may be a dog, but I know who India’s most loved writer is.

The name is Bond…Ruskin Bond.

For many from my generation who have neither grown up nor really found a place in the wilds of the world, our pilgrim remains Ivy Cottage, Landour.

Here are our favourite Ruskin Bond quotes on love and life, hills and heartbreaks, seasons and sorcery and the ghosts and geraniums.

Ruskin Bond observes and reports on life like he only can. His succinct phrases tell me more about the meaning and motive of life than all the gospels.

1. A story never really ends and happiness is something that comes and goes. It is as rare as a rainbow. ~The Kashmiri Storytellers

2. We must move on, of course. There’s no point in hankering after distant pleasures and lost picture palaces. But there’s no harm in indulging in a little nostalgia. What is nostalgia, after all, but an attempt to preserve that which was good in the past?

4. In our imperfect world, there is far too much talk and not enough thought.

5. “Well, it often happens that people with good eyesight fail to see what is right in front of them.” ~The Eyes Have It

6. One sure way to lose the world and everything in it, is to try grasping it.

My first brush with Mr Bond’s writings was The Woman on Platform 8, the heart-touching story of maternal affection. The woman who meets a young boy on the platform, whom she has no hopes of meeting again but devotes all her love to him.

"We become writers before we learn to write. The rest is simply learning how to put it all together." ― Ruskin Bond pic.twitter.com/5nCJPhrk3r

Ruskin’s father introduced him to nature as the best friend of human beings. To this day, Mr Bond hasn’t forgotten this. His writings on the wild-flowers, ladybirds, the smell of the rains, and thunderlights over Pari tibia retain this rustic charm.

11. The best kind of walk and this applies to the plains as well as to the hills, is the one in which you have no particular destination when you set out.

12. For nature does things in good order: And birds and butterflies recognize No man-made border

13. Animals have simple needs, and all they want is to be left alone. We are the interlopers.

14. For every time I see the sky, I’m aware of belonging to the universe than to just one corner of the earth.

16. It is always the same with mountains. Once you have lived with them for any length of time, you belong to them. There is no escape.

18. “And when all the wars are over, a butterfly will still be beautiful.”

20. Trees make you feel younger. And the older the tree, the younger you feel.

21. And I knew that as long as I responded, in both a physical and mystical way, to the natural world-sea, sun, earth, moon and stars – I would never feel lonely upon this planet.

The slopes of the hill we’re on are full of deodars. Bond had written of them in Notes From A Small Room—

Ruskin Bond’s writings on love, be it The Night Train At Deoli or Death of a familiar, did more for my teenage ideas of romance than any Bollywood movie. To understand that depth and pause in today’s digital age makes one return to her elements.

25. You find love when you least expect to, and lose it when you are sure that it is in your grasp.

~Death Of A Familiar

And so often I wondered how real was Sushila from ‘Love is a sad song’?  The beautiful short story has the writer reminiscing his past.

28. You may break, you may shatter the vase if you will, But the scent of the roses will linger there still. ~A Handful Of Nuts

29. “The past is always with us, for it feeds the present”

31. She did not know it then, but some of the moving forces of our lives are meant to touch us briefly and go their way. ~Sita and the river

32. For the most time I’ve followed instinct rather than intelligence, and this has resulted in a modicum of happiness.

Sometimes I wonder if this is my life or a reverie. The trouble with reading Bond is, that you don’t want to return to the real world. I want to play Ruskin Bond, to be amidst hills, without an eye to judge me on stakes of money, stature or profile.

Meeting Ruskin Bond (either through his books or in-person) is an exorcism that cleanses all the demons of adulthood and makes one who we once were, innocent. His stories smell of the hills. The way hills no longer smell of them.

And as I told him of my lost sister Rusty, named after Ek Tha Rusty, a show based on his stories, aired on Doordarshan. He chuckled and remarked, ‘Oh, she must have been an adventurous dog!’

Where can you meet Ruskin Bond?

Well, apart from the books, you may meet Ruskin Bond at Cambridge Book Depot, Mall Road, Mussoorie where he meets his fans every Saturday.