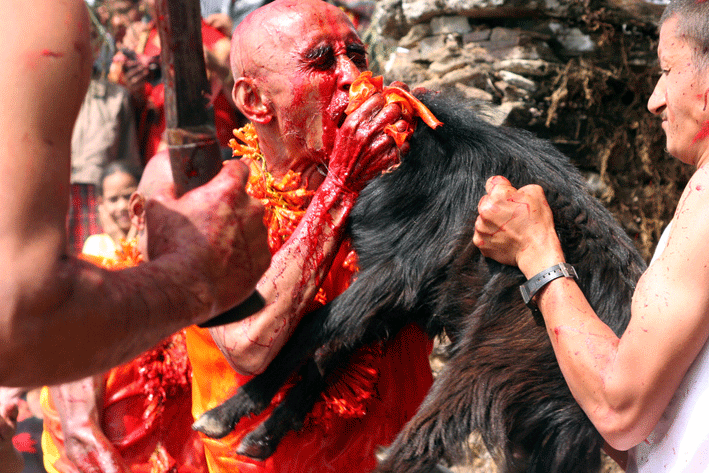 Disclaimer: – The following post may ripple through your religious sentiments…so be it!

“The greatness of a nation and its moral progress can be judged by the way its animals are treated…I hold that, the more helpless a creature, the more entitled it is to protection by [people] from the cruelty of [human kind]”—Mahatma Gandhi

The nefarious acts against animals seem to be on a never-ending spiral loop. Every 5 years, the otherwise pristine Himalayan state of Nepal witnesses the gory bloodshed which notoriously relates to Nepal Gadhimai festival or ‘The World’s largest animal sacrifice’. Animal rights activists have termed the sacrifices a ‘shame on Nepal’ and urged for immediate actions to stop the barbaric killing of animals. Come December 2009, the heinous act would be resurrected again and 200,000 animals would go under knives to please goddess Gadhimai in Bariyarpur, Bara District.

Call me an illiterate canine, if you please but then I fail to understand how the slaying of mute species would please a goddess? Nepal’s Gadhimai mela sees carnage that has animals attributed as the symbols of the mental smokescreens which are to be removed by the community.

How enlightening is that?

How can decapitation of 60,000 young buffaloes and 1, 40,000 wild rats, pigs, goats and little birds bring inner peace and sanctity to humans? Such an episode of atrocity and ruthlessness…all in the name of religion! His Holiness the Dalai Lama in his book ‘The Vegetarian Way’ had quoted ‘Life is as dear to the mute creature as it is to a man. Just as one wants happiness and fears pain, just as one wants to live and not to die, so do other creatures’.

Religious wars are basically people killing each other over who has the better imaginary friend. https://t.co/gL4u7bYtPd

I guess that he’s doing something more vicious – killing the very soul of mankind. If religion calls for this then us animals have learned enough about the dining table preferences of the deities. The epicurean pleasures that Gods seek are idiosyncratic to themselves, Jesus relishes a baked turkey on a Christmas Eve, Allah prefers cattle and Kali mata will have nothing but the warmest of animal blood. All of it while no sacred text has ever called for animal killing.

I wonder if this world of a thousand gods and goddesses has one  who has the fetish for human flesh? For the truth remains that no sacred text, none of the doctrines call for animal sacrifices but the pundits, the padres and the ulemas have their own interpretations.

…And all of this when the so-called human Gods have us as Ganesha’s mouse, Durga’s lion or the Shivji’s faithful bovine. Guess Lord Ganesha is himself part animal!

Is this massacre of God’s worthy creations and flowing ravines of innocent blood, the only salvation for human sins? I am brought back to the thought waves which question if the world in which we live (and where some wait to die silently) is a multitude of Gods and Goddesses for the man alone. Is there not a single divinity for the fauna to be blessed with? Where is the God of small things?

We, the animals also kill but never have we connoted a religious background to our killing for food. For we believe that it’s all in the food chain mechanisms and not in gospels. We kill for survival and not to appease the bible. I have always found the killing in the name of religion, the flagitious of all crimes possible. How in the name of sacred texts, the creed, the hymns and mantras can such a massacre be justified?

Call on your fatwa, charge me with voicing anathematized verses against the Bible…crucify me, slay me on the altars of the goddess…for I know no fear as you have made me believe my fate lies below the machete. I started out with the purest of rage in my bosom, but now the feeling is also mingled with melancholy or rather regret. Regret for being the most faithful companion of man. I wonder whether my rage would match the atrocious vigor of you humans, truly you belong to a different race. Superior? I don’t think so.

Update: As a major victory for animal welfare activists across the globe, Nepal’s temple trust announced to cancel all future animal sacrifice at the Nepal Gadhimai festival — the world’s biggest animal sacrifice event held every five years.  The Trust also urged all devotees not to bring animals to the festival — a Hindu religious practice which had been continuing for the last 300 years.