You Need to Know How The Lion Whisperer is saving Lions! 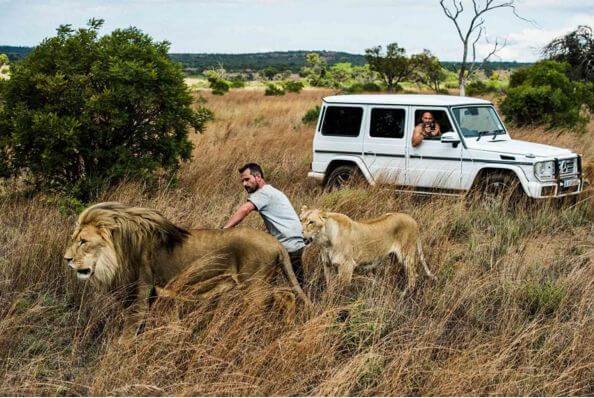 Chances are you’d have seen him on TV, a man playing with lions like one of his besties.  Kevin Richardson, the “self-taught animal behaviorist”, better known as The Lion Whisperer, not only cuddles and hugs lions but also draws society’s attention towards burning issues like canned lion hunting.

How The Lion Whisperer is Saving Lions?

Blessed with an innate ability to understand and interact with the wild animals, Kevin got his first break as a part-time opportunity to look after a pair of six-month-old lion cubs. In his book, Part of the Pride, Kevin touches on how he has evolved as an individual who fell in love with two lion cubs in the late 90’s and it changed his life.

Kevin runs his own wildlife sanctuary in northeast Pretoria, South Africa with the mission to increase education, awareness and funding, of the rapidly declining large carnivores in Africa due to habitat loss, human-predator conflict, unscrupulous hunting, disease and their illegal trade.

With 13 separate predator enclosures to keep the animals safe in an open and natural environment, Kevin Richardson Wildlife Sanctuary helps the animals to live their lives in a relatively wild state. Kevin has known each lion in his sanctuary from the start.

Thanks to Kevin’s unique relationships with lions, hyenas and other wild animals, and the several documentaries that he has produced highlighting the plight of the lions both in captivity and in the wild, the world has known better of the wild.

Richardson says he’s trying to fight the misconceptions that breaking a wild animal’s spirit with chains “is the best way to subdue them.” Rather he tries to get to know animals as individuals, with individual personalities. “He uses love, understanding and trust to develop personal bonds with them.

Kevin says that the way he has been able to develop relationships with these animals doesn’t differ much from relationship-building between humans: it takes respect, understanding, and trust.

Kevin uses the popularity that he has garnered as The Lion Whisperer to create awareness to the dwindling lion population. (Only 15,000-20,000 lions are left in the wild!)

Canned hunting isn’t a single event of a pseudo hunter shooting a lion in a situation whereby the lion has been ear-marked and stands no chance of fair escape, it’s a process starting with the petting of a cute cuddly cub. Today’s much-loved lion cub that is petted becomes tomorrow’s trophy.

As a vehement rebellious voice against the cruel sport of canned hunting and entertainment industries that breed such majestic animals for various forms of sick human enjoyment, Kevin is trying to do a whole lot more than mere whispers to the lions. He is raising awareness for the plight of African lions — who have lost 42 percent of their population in just the last 21 years!

For those visiting South Africa, you can volunteer at the Kevin Richardson Wildlife Sanctuary.