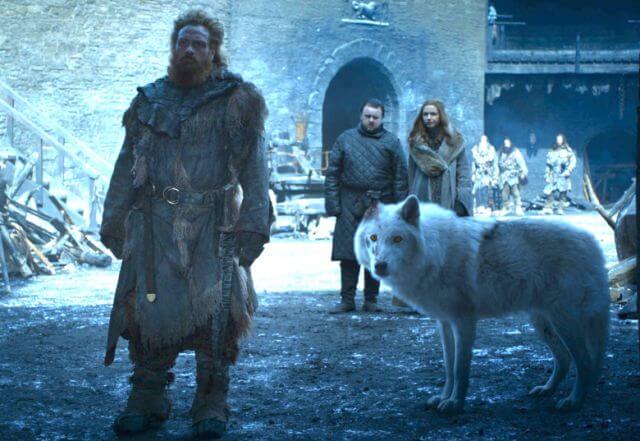 The last season of Game of Thrones was a distant shadow of the show’s glory days. The best show in the seven kingdoms took a Dexter turn and things didn’t make much sense.

While the Westeros is hell-bent on making Dany the mad queen; the malevolent Night King who had an epic build-up as a nefarious villain, all through the seasons, died killing fewer major characters than Walder Frey.

Even if G.R.R. Martin were to pick the worst of this season’s snubs, the top of the pack would be Jon Snow ghosting the Ghost in Episode

Let us rewind it for you:

As Jon Snow heads south to fight for Daenerys Targaryen, he bids goodbye to a host of friends including Tormund, Samwell Tarly, and Gilly but when he sees his loyal direwolf Ghost, waiting patiently for just a friendly pat, he snubs the good boy!

Imagine how Ghost would have felt. Like Jon, he was the outcast from – other Stark children and the litter of pups. For much of the eight seasons of the show, the good boy followed and protected Jon. How can Jon Snow ride the dragon a few times and forget about Ghost?

Why Ghost deserved a better goodbye?

1. He first warned Jon of a wight at Castle Black, and then bravely fought the army of the dead during the Battle of Castle Black.

2. He protected Jon Snow’s corpse so that he could be resurrected.

3. Saved Sam from a wight. Later, in season 5 he saves both Sam and Gilly from assault by the black brothers. Ghost goes on to save Jorah; Jorah eventually saved Dany from the Night King…

Why Jon Snow didn’t pet Ghost in his ‘Game Of Thrones’ Goodbye?

Given all that the good boy Ghost did for his human, everyone in the seven kingdoms (and far off Essos) was left wondering as to why Jon didn’t give his furry friend a goodbye hug, or even a light pat on the head. All that the king in the North did was to stare into Ghost’s eyes as he readied himself to go south for yet another war.

The GoT directors later explained that since the direwolves are CGI creations, they felt it best to keep it as simple as possible. Furthermore, the special effects budget was an issue. We know what you are thinking: Who needs all that Dragon action, give us a proper closure!

What happens to Ghost in Game of Thrones?

Ghost will now go north with Tormund and we believe he will live out his days in peace with the wildlings. And if he’s really lucky, maybe he will be reunited with his sister Nymeria.

Tormund is also reeling from a broken heart after being rejected by Brienne — what better way to heal than with a direwolf’s love and loyalty?