When a dog comes home! 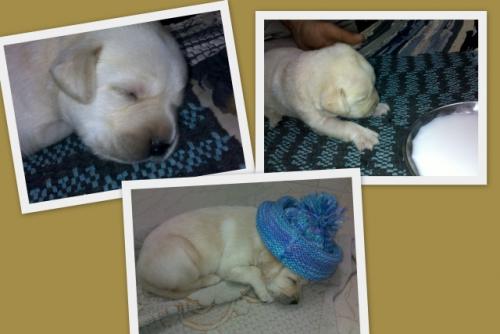 Remember the exuberance that electrifies you when a dog comes home? Especially for the very first time? The tinker of paws, the innocence in the eyes (not to forget the potty training).

In this endearing guest post, Ankush Bahuguna chronicles the events that led to Sheero’s homecoming.

Papa always loved dogs! My extended family always had dogs, be it my cousins or my neighbours. So it came as no surprise that I wanted one for myself too. Mummy had always frowned upon the thought of bringing home a dog for she already had three worse-than-animals kids to look after!

Convincing dad had always been easy. But just before Papa would press talks about petting a dog Mummy would enter the room warning us against it. God knows how she always overhears such conversations while working in the kitchen two walls away!

When a dog comes home!

I was almost 20 now. I wonder how it suddenly happened…Papa called to tell me that he was bringing home a pup. We had been planning this openly in front of Mummy for a month to prepare her mentally. She didn’t react very strongly; probably she was used to winning this battle by now.

I called papa five times in those 15 minutes. He finally arrived, with that inanimate off-white cotton-ball. He breathed heavily as I picked him up. We put him on a blue and black doormat Mummy had recently bought for our living room. She had a headache and was in her room. (Thank god we could get him inside without any “isko andar lane se pehle tumhe meri laash par se guzarna hoga” scene right at the door).

She got out of her room and found a puppy lying on the doormat. The frown she came wearing disappeared behind a wide smile and teary eyes. “kitna chota hai yeh…” she murmured, picking him up! I looked at didi, with the most surprised look I could have made!

“Mother’s instinct,” she said refraining herself from touching it.

Mummy held him again in her hands, He yawned and licked her.

She was talking to him like it was her 4th child while papa was busy warming dilute milk for him. Beneath the soft (just like the babies in the Johnson and Johnson’s advertisements) white fur, we could hardly see where his eyes were. He could just sniff, if at all. A tiny pink tongue came out and he licked a bit making no difference to the level of the milk. A few moments later, he fell asleep with his snout in the milk plate. 🙂

Labradors grow really fast! You come back from the nearby market in 15 minutes and they are 50gms heavier. Mummy looked like a little girl playing with a stuffed toy. She just didn’t leave him for even a minute! Btw, she was the one who disliked dogs! He was busy sniffing the sofa which has been his favourite place in the house ever since and one of those that Mummy never wanted him to touch/leave his fur on!

In a month’s time, he started recognizing his name. He started following papa everywhere he went, even in to the bathroom. We bought chewy calcium bones for him which remarkably were the only things he never chewed. I am his favorite chew toy ever since I put my finger in his mouth exclaiming how tiny his teeth were.

He has been a well-mannered puppy but only when it comes to his own belongings- his bedding, a bathroom wiper which he seems to claim is his, a wooden plank which he found from our store, a JK White Cement packet which he keeps spilling over in the whole house, papa’s new slippers minus the rubber sole that he has already chewed, a football which Badi didi got him.

New pieces of his choice are added on to the exhibition that he arranges on his bed every day. He has been potty trained now but once a week he likes to pee right in the center of our living room, look up and run away just before we shout.

He knows that he is not allowed inside the kitchen so he sits right at its door all day to make mummy stumble upon him and drop the food so that he can lick it all! He knows “ghoomi ghoomi” means he is going to be taken for a walk and he instantly jumps up and opens the showcase drawer and takes out his red and blue leash. He knows what time he’ll be given food so he wakes up Mummy accordingly or if he wants to be entertained. He cannot stand two people talking to each other if he isn’t involved in the conversation.

He growls if you hug someone and that someone is not him. Mummy allows him to get onto the bed once in a while. He comes up only if he is promised a large enough space which happens to be almost one mattress for him to laze around. In fact, he comes up and claims his space. We helplessly adjust.

He knows when I am actually calling him for food and when I am just fooling him to get him out of the room. He knows that everyone on the street finds him “chhooo chweet” but doesn’t know that they don’t like to be bitten in return. He knows which shop sells Kurkure and Parle-G biscuits because he gets them himself, with or without the consent of the shopkeeper.

He knows I will take care of him because he challenges other street dogs by his loud puppy barks and hides behind me when they come. He knows I am writing about him because he is sleeping on his favourite sofa with his head on my lap, reading all of this!

P.S. I might sound like a mother to him but believe me – they do that to you!

8 Replies to “When a dog comes home!”