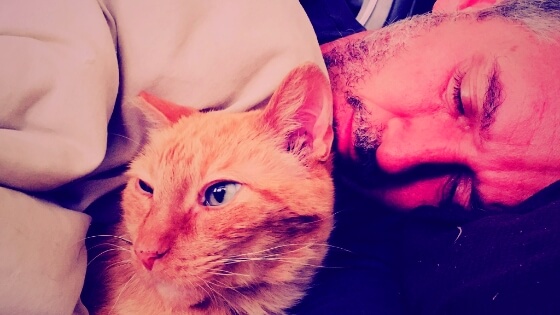 I’ve had the pleasure of knowing Inaia Jimenez, the DJ/musician and yogini since early 2011. Bonded over a shared passion of all things dogs and cats (in that order). After a prolonged hiatus, I found in my mailbox yesterday, a heartwarming cat adoption story from Inaia…

On September 5th 2017, I rescued an orange cat. He was dying under a car in the parking lot of my building. Hit by a car, this stick-skinny cat had a bone sticking out of his leg. He had almost no fur and was covered in scabs.

And then he rescued me and my whole family.

The cat in the parking lot

The day I saved him wasn’t the first time I had seen him. I had been aware of his existence in the parking lot for about a week but hadn’t realized what terrible shape he was in. Having seen him under the car, I had taken him food and water but he never tried to stand up or walk. A week after I first saw him, he had found a spot under my car. When he saw me get into my car, and he started to leave, that is when I realized what terrible shape he was in. I immediately called my friend who volunteers for a rescue organization. He and his people said I could take the cat to get checked out at a nearby veterinarian’s office that they had a relationship with. I just needed to trap him first.

I rounded up my husband and our friendly neighbors, a couple who love animals as well. It took all four of us surrounding, coaxing, calming and trapping the kitty. At some point in the process, the cat aggravated his already terrible injuries, even worse and could no longer move or feel his hind quarter at all. He was dragging himself using his front legs when we were finally able to trap him and put him in a carrier. It was heartbreaking to see.

He was in terrible pain and he was terrified. I had no idea how I could help this cat. I wanted so desperately to help this poor cat and see him looking chubby and furry, sleeping on someone’s warm belly under the covers but I felt powerless to make a difference in his life, thinking about the costs and the small space we live in.

At the Veterinarian’s office, I had to write a name for the cat. I looked at his thin, triangular-shaped face and disproportionately large eyes decided he looked like a beat-up little alien and named him ET. We took him to the vet, who told us that we had “picked a doozy” and that he would do his best to help.

This was the beginning of several months of daily visits with ET in the veterinarian’s office, a slew of procedures, antibiotics, supplements and tireless efforts to save ET and his broken, infected leg. We created a crowdfunding campaign for the purpose of covering ET’s medicals costs. People were moved and they donated to the campaign and shared it with their friends. The rescue organization made deals with doctors and helped us keep the costs as low as possible. All this support resulted in us raising all the money ET needed for his care.

Unfortunately, the infection in his leg remained after one month on antibiotics and the doctors recommended amputation in order to save ET. We had truly tried everything to save his leg, and now it was time to let go and embrace the next steps in the process to save ET.

The amputation went well, and he came back to our house to recover. ET ended up seamlessly transitioning into an integral member of our household. Our young, black kitty, Mr Gonzalez plays with him nonstop. ET and Mr Gonzalez talk to each other and hug and, when one calls, the other comes over to play. Every time. Even at 4 am.

ET and Chloe, our 15-yr-old tabby girl, cuddle and groom each other with tenderness and enthusiasm for hours each day. ET’s favorite spot is in the center of our couch. He eats like a champ and keeps putting on mass and getting stronger, more relaxed and confident every day. My husband, cuddles and loves on ET every chance he gets while and I am obsessed with kissing, scratching, petting and cuddling him. Our whole family has fallen in love with ET. I can’t imagine our home without him. 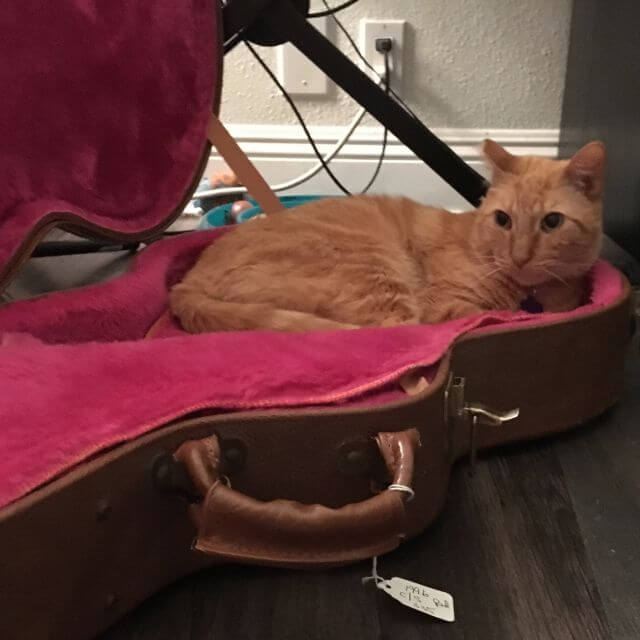 Play me a song, would you?I am so glad that I ignored all the thoughts and fears I had about my ability to help him, and took action. I reached out to my community and people stepped up and came together. The people who showed up, presented me to the beauty of humans. We saved this sweet soul’s life because we came together.

And in uniting, we made sure that ET was finally home.