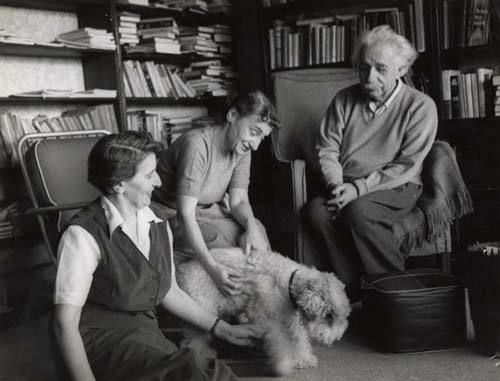 Nobel laureate and TIME magazine’s Person of the century Albert Einstein changed our understanding of the world as we knew it, unlike any other scientist. In 1905, hailed as the renaissance year for science, Einstein published four research papers and toppled over 200 years of scientific fundamentals with the theory of relativity giving, perhaps, the world’s most famous equation, E=mc².

Known as the father of modern physics, a synonym for genius, Einstein was fond of animals and enjoyed the company of cats and dogs around him. As the principal pillar of this dog’s favourite science triad, Einstein along with Nikola Tesla and Sir Isaac Newton have allured many of my recent discoveries about cat colonies in galaxies beyond Milky Way. I would divulge more on them after sending a test subject (read: the human being) to far off space, a giant leap for canine kind. Any volunteers?

For perhaps the greatest genius who walked the face of this planet, Einstein did have those stellar moments of sheer brilliance and absent-mindedness alike; that idiosyncratic trait that you associate with the gifted.

In the trailing lines, I have compiled some heart-warming ‘cats and canine’ anecdotes and Albert Einstein dog quote (s):

I. Fond of animals, Einstein kept a housecat who tended to get depressed whenever it rained. Ernst Straus recalls him saying to the melancholy cat: “I know what’s wrong, dear fellow, but I don’t know how to turn it off.”

II. In Faster Than The Speed Of Light, João Magueijo shows the childlike purity of Einstein’s earnest efforts for his kittens:

While Einstein lived in Berlin, working as a patent office clerk, he did his research work in a small study away from his home. In this study, he kept a large number of cats, of which he was very fond. However, the cats at times could be rather burdensome, scratching persistently at closed doors, demanding to roam freely throughout the house. He could not leave all the doors open, so he decided to cut holes in the bottom of the doors, producing cute little cat doors.

In that year, he had roughly equal numbers of large and small cats. Therefore, quite logically, he cut out two holes in each door: a large one for the large cats and a small one for the small cats. It made perfect sense.

Einstein on his pet dog Chico

“The dog is very smart. He feels sorry for me because I receive so much mail; that’s why he tries to bite the mailman.”   ― Albert Einstein

Einstein on the notion of genius

Einstein was of the opinion that everyone was bestowed with unique gifts and was critical of examinations, which he felt were unnecessary as anything that could be looked up in a book wasn’t worth remembering.

I hope you liked the witty side of Albert Einstein. And now my friends, drawing inspiration from the genius I too must return to my quest SETCI (Search for Extraterrestrial Canine Intelligence) project.

10 Replies to “A dog, few cats, and Albert Einstein”