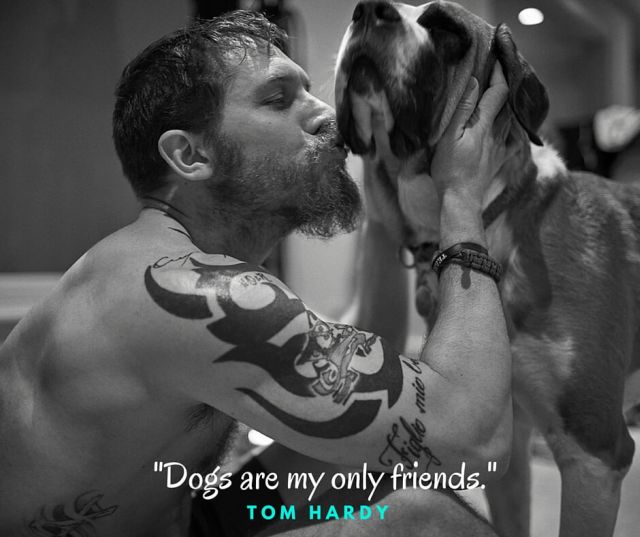 Tom Hardy may play the tough guy in movies (‘Bane’ in Dark Knight Rises, ‘Max’ in Mad Max: Fury Road…) but off the celluloid, he’s as gentle as they come. Chiseled with raw talent, a brooding gaze, and expressive eyes, this actor has stamped his mark on Hollywood.  Add to it the fact that Tom Hardy is a devout dog lover and you’ve our complete man! Tom’s devotion to dogs – his own and the various others he rescues and helps re-home adds to his charm.

“I don’t have any friends so I like to keep [to] myself. I have a dog and a son. A dog couldn’t do anything to upset me, you know, and neither could my son. My ideal level of fame would be one that allows me to be with my dogs, and walk down the street, and people know me and say hello.”

He believes that fate had brought him together with every dog he’s ever loved, beginning with Max – the late mutt he got when he was 15.

“Do you believe in serendipity? I do. No such thing as coincidence. So here’s my dog, right? [Displays a photo on his phone] His name was Mad Max when I got him. Like the first dog I ever had. Anyway, I fell in love with Max’s mom, Cass, when I was 16. My friend had her. And I was like, ‘If she ever has puppies, please can I have a dog?’ He was like, ‘Yeah, sure.’ And then my friend disappeared, and I never saw him again. But I went to visit his mom, see how she was and say hello. And she said, ‘Oh, we’ve got something for you here.’ And I open up the door, and there was Mad Max. And I was like, ‘I don’t like that name.’ ‘Cause he’s not mad, he’s just misunderstood.”

4. Tom Hardy wouldn’t attend the drama class without his first dog, Max. “I wouldn’t go to class unless Max was allowed in,” recalls Tom. “Max was my support unit, it’s like I had a focus; I had an identity and higher self-esteem because something relied on me and loved me constantly. Then I felt important. I can’t stand the kind that fights their dogs, but I wonder how many sleep with their dogs under the covers at night? I’m very, very lucky that people—from 17 to now—have always allowed me to have my dog around.” 5. Tom Hardy has the ashes of his late dog, Max, on the couch at home, occupying a place Max used to love to hang out.

6. Tom found his current pet Woody in 2011 while filming Lawless in Atlanta. He spotted a homeless dog running loose on the highway. Not only did Tom saved the dog, but he also brought him home to London, naming him Woodstock (or Woody for short).

7. Red Carpets are where you see Hollywood’s leading men with their lady loves but for Tom Hardy, his adopted mutts take all the attention. Tom recently took Woody to the premiere of Legend.

Earlier Tom had taken the puppy Zora at The Drop premiere. (The movie follows the story of a man who decides to close himself off from the world, but an abused pit-bull puppy changes his mind.)

8. Tom Hardy is a Pit Bull lover and advocate. In an interview to Yahoo! Movies, he quipped – “Did you know that the Pit Bull’s the highest-decorated military dog? It’s true, because of their loyalty, and its sensitivity. They were the favourite American dog for many, many years. [People would] leave the baby on the porch with the dog. Go online and look it up! You’ll see all these Pit Bulls with babies.”

9. Although Tom ensures that his dogs are never left alone, in the rare instance that they are left unattended, he leaves the TV on so that they don’t feel alone: “They’ve got to feel that someone’s in the house.” 10. Hardy even feels for the poor poodle who gets a haircut just for his human’s fashion sense – “I feel sorry for a poodle because he’s a dog. You know, a dog is a great creature. They would do anything for you. And the poodle gets a haircut. No one asks if the poodle wants his hair cut like that. Do they? They just f*****g cut his hair like that. And he just walks around. And everyone is like, ‘Why is that poodle so snarky?’ F*** you.”

Also read, how Leonardo DiCaprio is helping save our environment and endangered species.