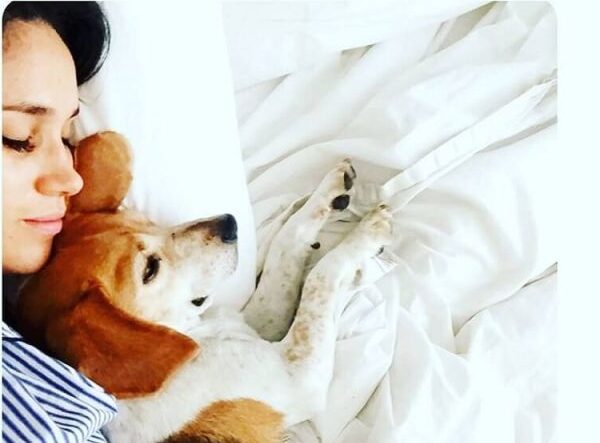 Meghan Markle, the people’s princess, is a champion crusader for all things right. The Duchess of Sussex is a devout dog lover and an advocate for rescuing animals in need of a home as against buying pets.

Megan, in fact, has two rescue pets – a Beagle named Guy, and a Labrador-Shepherd mix named Bogart. The antics of her beloved beagle was, in fact, one of the highlights at the Royal wedding reception.

However, it wasn’t always Kensington Palace, for this now famous beagle as he was once in a kill shelter. From road to royalty, it has been a phenomenal journey for this little pooch!

Guy was found abandoned in the woods in Kentucky in 2015 and was taken in by a shelter when no one came forward to claim him.

Unfortunately, he didn’t find a home in the shelter and was put on the euthanasia list. Days before he was to be put down, a Beagle rescue group in Canada was contacted by the shelter and decided to take him in… to Canada.

Groups of dog lovers took turns driving the Beagle in one-hour shifts from Kentucky to an adoption event just outside of Toronto where the then Suits actress Meghan Markle was filming.

Drawing parallels to a Hollywood script, Guy’s life was to be turned all for better from here on!

Over to you, please #AdoptDontShop