7 loyal dogs who waited for their dead humans 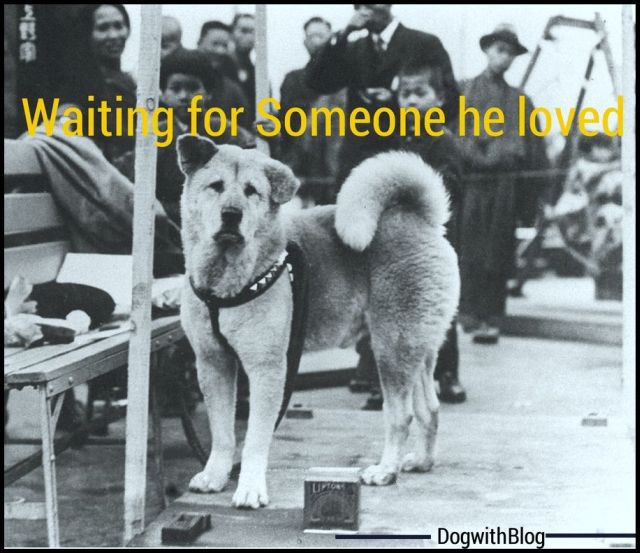 ‘Loyalty’ to most of us, conjures up an image of the dog. Histories inked with their unflinching courage, companionship, and love.  Researchers would tell you that the smartest of us have a vocabulary of 300 words. But anyone who has ever loved a dog knows differently. Although the chances are slim if not for dogs, I hope you do find someone who loves you as much.

I am a grammatically challenged canine and linguistics, I know little of. Emotions, however, comprise a language of their own.

Centuries turned, worlds’ changed, humans evolved (for better or for worse) but dogs, we have forgotten to keep pace. Even in the face of death. From Hachiko to Ciccio, we have waited in earnest for that caressing pat on our mane which may never be. Grievance, you see, isn’t just a human trait.

Here are seven dogs (amongst countless others) who refused to believe in the phrase ‘Till Death Do Us Part’ and knowing their story you can’t help but wonder How do you wait for someone who will never return?

1. ‘Leão’, the dog who refused to leave his human’s grave.

In January 2011, Brazilian capital was hit by a decimating flood. Amid thousands of causalities, there was a mixed breed dog (as humans refer to some of us) who refused to leave his owner Cristina Maria Cesario Santana’s grave. For days, Leao sat beside his owner’s grave in Teresopolis, near Rio de Janeiro, the area hardest hit by the flooding. He had to be taken away by the medics when his condition became critical.

Thankfully, he got a new home. There have been reports that he ran away twice to the grave again.

2. Capitan: the Unflinching loyalty of the Argentine dog.

In Argentina, every single night since 2006, ‘Capitan’ has slept beside the headstone of his master’s grave. Miguel Guzman had brought ‘Capitan’ home in 2005. After Guzman died the next year, Capitan disappeared. A week after the funeral, the family returned to the cemetery in central Argentina and found Capitan there, howling. The heartbroken dog had found the cemetery and tomb on his own and has lived there ever since, sleeping on Guzman’s grave.

Also see: Dog visits grave of his owner every day

3. Hawkeye: From Frisbee to Funeral

In 2011, 35-year-old Navy SEAL Jon Tumilson — died in the helicopter crash that killed 38 American servicemen. There were 1,500 mourners in attendance at the local school gym paying their last respects, but all eyes were fixated on ‘Hawkeye’, who refused to leave the side of his dead friend’s casket.

4. Ciccio: For whom the bell chimes

Every day when a church in Italy rings the bells, Ciccio, a 12-year-old dog comes along hoping to reunite with his dead friend again.

Ciccio and his owner lived in the village of San Donaci in the southern region of Puglia, Italy. When the bells tolled each afternoon, he would accompany the lady to the church. After Maria’s death, he attended the funeral and followed his mistress’ coffin as it was carried into the same local church. Thereafter, he just kept coming back, every day.

His devotion has so impressed the parishioners that they rallied together to care for him, giving him water and food and allowing him to sleep in a covered area outside the church. The priest, while hoping to find a new home for the faithful dog, even lets Ciccio sit in front of the altar during service.

5. Ruswarp, waited 11 winter weeks by his human’s side.

Ruswarp, a 14-year-old Border Collie, used to hike with his human, Graham Nuttall in Wales countryside. In the winter of 1990, when neighbours noticed that Graham hadn’t returned from one of his hikes, a search party swept the area in search of Nuttall and his pup to no avail. Eleven weeks later, another hiker, found Nuttall’s body near a mountain stream, guarded by Ruswarp.

The dog had waited all this while by his master’s side for help to arrive.

Unfortunately, the poor dog didn’t survive his human’s funeral and passed away shortly. In 2009, a bronze statue was put up at the Garsdale railway station in his honour.

6. Canelo, the loyal dog from Spain.

Canelo, the dog, used to accompany his ill human during his weekly visits to the nearest hospital in Cadiz, Spain for dialysis treatments. The hospital policy prevented non-service animals from being inside, so the dog would wait by the door until his human’s treatments were finished. After the treatment, they’d walk back home together.

One day, due to complications, the man died in the hospital during one of his dialysis treatments. Canelo, however, couldn’t understand the concept of death and stayed back, day after day, not leaving his position outside the hospital, waiting for his human to return so that they’d go home.

This continued for 12 long years, with neighbours and people in the community providing him food. He was killed by a car outside the hospital and his long wait was finally over. The town folks were so moved by his loyalty and devotion that they put up a plaque in his honour, as well as named an alleyway after him.

7. Fido, the Italian dog who waited 14 years for his master

In 1941, amid world war II, a brick kiln worker, Carlo Soriani found an injured dog by the roadside. Carlo cared for the dog and eventually adopted him, naming him ‘Fido’, translating to ‘faithful’ in Latin.

Once he recovered, Fido would accompany his human every day to the bus station at Luco di Mugello and would wait there until Carlo returned from work. This continued for two years until a bomb destroyed the factory where Soriani worked. Soriani didn’t survive the blast, but Fido kept waiting.

For the next 14 years, until Fido died, he returned to the bus station every day hoping to find his human dad. A year after the dog passed away, the town erected a monument to honour his loyalty and placed it in the city square.

In 1957, Time magazine also wrote an article about Fido.

There are many more Hachiko(s) out there; some with their tales guarded off from the media lights; silently waiting for someone who will never return.

As you go to bed tonight, think for a minute of Capitan who would be on the gravestone in Argentina; Ciccio, with his hopeful eyes in Italy and as you hug your furry friend close, please try to make a difference the next day for those dozens of Hachiko walking around us. Just waiting for some love. Everything counts, even a friendly pat.

Have you heard of more ‘legends’ like these, loyal dogs who waited beyond death? Want a best friend you can truly call your own? Please choose to adopt!