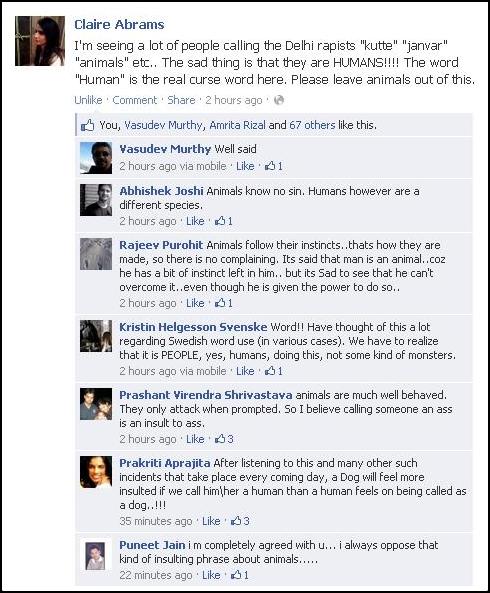 Delhi is numb. An entire city lapsed in a coma.

No, it’s not because of the infamous cold waves but a macabre crime – the Delhi gang rape. And whilst the angst of the society looms large over news channels and social media, the word on the street seeks justice. This anger is a necessity and Delhi has no dearth of it. Heck, the wrath that we unleash as road rage would alone suffice! As my incisors wait in earnest to tear through the flesh of the culprit ‘humans’, I hope this cause doesn’t cough up with the passing days but grows into a growl.

But I have a problem. It arises when the society snarls at rapists, hissing shrill cries, “These dogs (kutte) deserve to die.” or “These rapists are not human but savage animals (jaanwar)”. Somewhere far from the candle protests, vigil marches and media debates, in a darkened nook where the voices miff, another of India’s daughter still seeks answers. And these aren’t to be found on twitter but in the terrains where the power kings are busy banning trivial things while the darkness reigns.

The answers rest this dog’s case against the society. And as I write, I hear a charged youth chanting on TV that this city has gone to the dogs. No, my friend the city has not ‘gone to the dogs’. Had it been, it would have been a lot safer. And the wise kitten by my side ponders, “Why do tests on animals if we have rapists in prison?”.