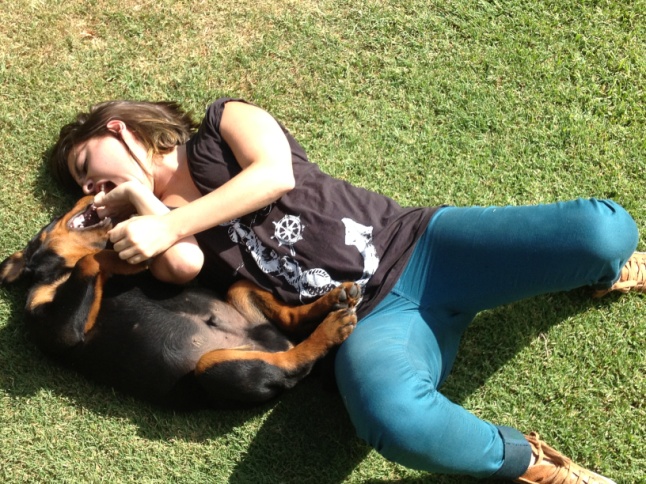 I love all animals, no matter what size or type, even those that scare people, like rodents. I had guinea pigs and cared for them as if they were my children!

But among all the animal kingdom, dogs hold a special place in my heart. I’ve always had dogs growing up and sincerely cannot imagine life without them. We, as a family, took care of them as if they were our own relatives, because in a way, they were. They would get the best canine food, the best medical care and of course, affection with no end. This is not a difficult thing to do since what they give back to you is so much more. You will never find a more selfless being, that will be there when you need someone and not ask anything in return.

We, as a family, had a particular affection for Rottweilers. People, however, seem to be really scared of them. You can’t really blame them, they are ferocious looking, but have great hearts. So it’s really no wonder that when it comes to dating and finding a life partner, someone that likes animals is a plus, and someone that loves dogs is a must. A lot of people in dating sites claim that they like dogs but it turns out that they just click on a box to make themselves sound caring. The real feelings will come across if you’re on a date and you come across a dog and you can see their real reaction to them.

I currently live in Argentina, and unfortunately there are a lot of stray dogs. I was out on a date with a man that claimed that he loved dogs, but when it came to the real deal, he failed the test.

On our way to the restaurant, we saw a car hit a stray dog and not stop. I screamed to the sight of this (I think anybody would have done that, even if you don’t love dogs as much as I did) and in tears I went immediately to see what the dog’s state was. Luckily he had only hit its leg, nothing too bad but he was in pain and there was no way I was going to leave him there. My date looked confused and not helpful at all. He mentioned our dinner plans, which were the least of my worries. I began to hail a cab to take the dog to a vet. He mentioned the reservations again. I did not listen; I was comforting the dog, trying to let him know that he would be taken care of. A cab finally got there and I climbed in with the dog wrapped in my coat. It wasn’t until I was already in the vet’s waiting room after the doctor had taken the dog in, that I realized that my date wasn’t there.

Had he been a person that really loved dogs, he would have hailed that cab and climbed with me. I lost a date and won a friend since the dog is still with me to this day.

Guest post by Eugenia Sincovich, an Argentine writer who can’t seem to stay in one place! She loves everything that reminds her that she’s alive and does her best to convey those feelings into her texts.